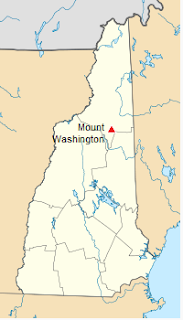 The road trip from Boston to the the parking lot of Mt. Washington's COG railroad was about a three hour drive.   It was a beautiful highway through the White Mountain National Forest and past the Franconia Notch State Park.  Josie was ecstatic seeing all the trees and was just amazed that everything was so green.  Arriving for now my 3rd time at the base of the COG railroad I had a general idea what to expect. 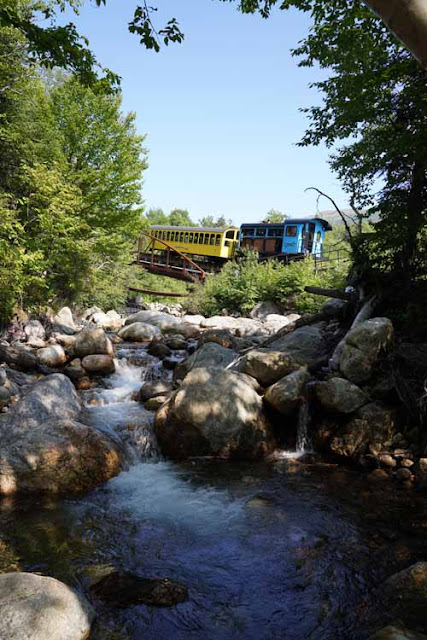 As luck would have it Greg & George had a faint cell phone coverage and called us as we were parking the car.   It ends up they had just finished their all day hike and we gave them directions to where we were parked and spent the next half on an hour catching up and learning all about their day's adventure.    I would have to admit I was a little jealous they had such a beautiful day to hike but after learning the difficulties of the trail it was good we didn't try to overdue it and hike our first day.   I had reserved a camp site a few miles away and they were off to find a shower and we would meet up with them later. 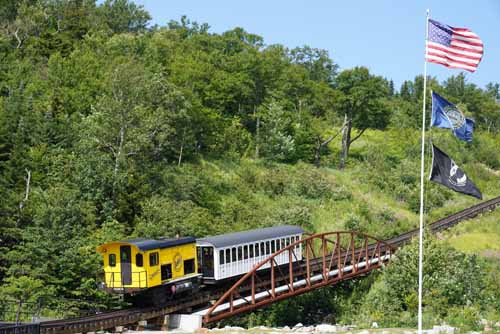 Upon checking in at the train depot early I was hoping we could catch a train an hour earlier than our reservation.  Well it ends up the time printed on the ticket in big letters front and center was actually our return time and our departure time was printed in small letters in the upper right hand corner which meant we missed our reservation, but with few hassles we were booked on the 4:30 train.  We had an hour to walk around the base of the mountain and check out the trains parked at the depot.  We also found a trail that the day hikers were returning and navigating over a beautiful running stream next to the tracks.

Climbing to the Clouds Movie

We also had enough time before our train to check out the COG railroad museum on the 2nd floor of the depot and learned a little of the history of the railroad.   We soon were called to wait in line and boarded the train.  Lucking out to get the very front seat which I hoped was ideal for picture taking on the way up.   The conductor boarded, entertained us all the way up with history of the COG railroad and described all the sites. 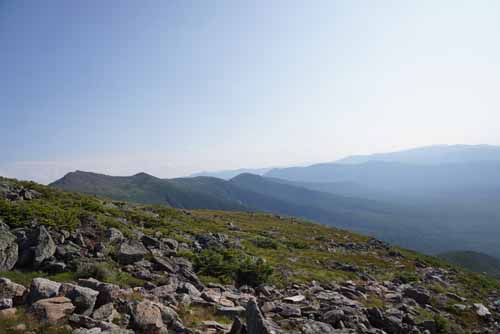 We were pushed up the mountain by one of the newer bio-diesel engines, yet there is still one of the coal burning engines still in use for one of the trips up and down the mountain.   There are a couple sections of the tracks that have switches where trains coming down take a second set of tracks so the trains going up can pass.   I think these switches were manual my first trip up in year 2000, but now they are automated with solar powered electric switches with houses next door that store the batteries.  They still stopped and checked the switches were in place before proceeding. 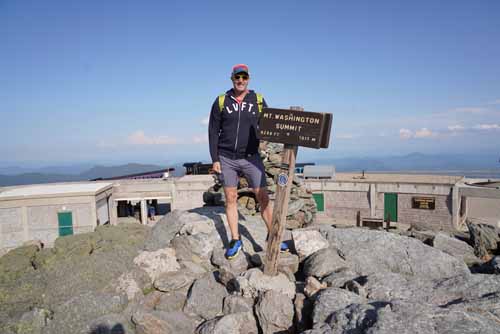 The average grade of the entire track line is 25% with one of the sections of the tracks which is called Jacobs Ladder maxing out at 37.41%.   The conductor encourages passengers to try to stand in which if you are standing up strait your feet could be inside the car and your head is outside the car.  Good times! 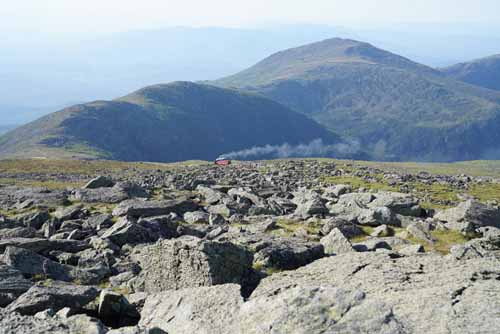 An hour at the summit is hardly enough time to take in all the sites.   Our first stop was to been the rush of the passengers to the actual high point of New Hampshire.  There is a pile of rocks and a sign signifying the summit.   I had played a few shenanigans near the summit trying to capture some epic photos.  We lucked out to have a clear day free of clouds tho the wind blasted I think over 30 mph.  The conductor said that the haze in the air was actually smoke from Alaska wild fires all the way on the other side of the continent. 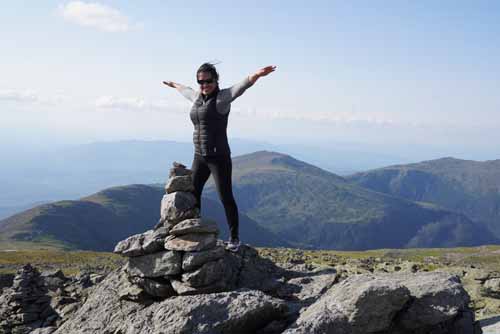 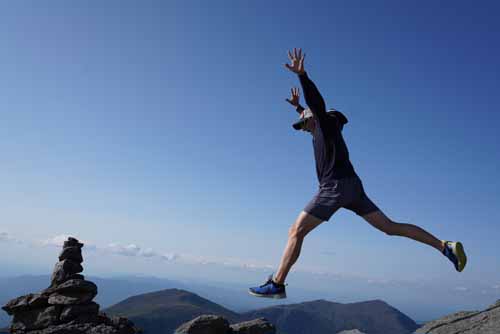 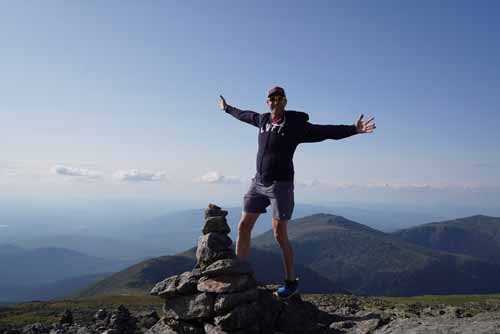 We went to the main building and Josie caught the tour of the weather observatory museum while I attempted to find some food.  Unfortunately the grill was already closed but ended up having one of the tastiest muffins of all time.   I sat and looked out the windows and heard other tourist that bought post cards and stamps to mail from the U.S. Post Office on the summit only to realize they didn't have any address with them to fill out on the post card. 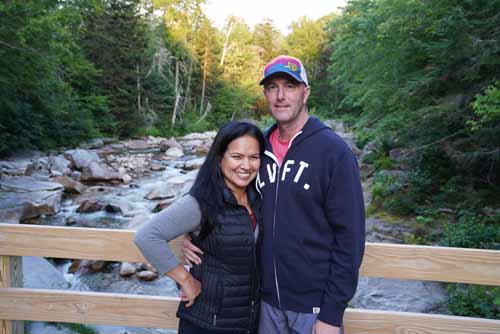 The trip back down the mountain was mostly non-eventful.  We had a new train and a new conductor as comical as the first.   The seats all flip so the front on the way up becomes the back on the way down.   We filed all the way to the farthest seat from the back entrance and ended up once again in the front row.   Again the conductor was right in front of us and he told that the engine and car are not connected and each one has their own braking system.   There was a safety system that once Josie got too close to and the conductor was briefly alarmed. 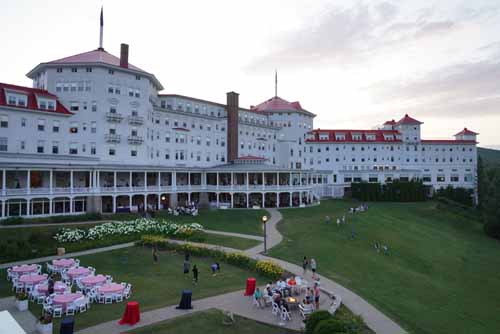 Of course another place to check out below the mountain is the great Omni Mount Washington Resort.  Now starting to get really hungry we stopped at about the only place to eat in the area called Fabyan's Station. 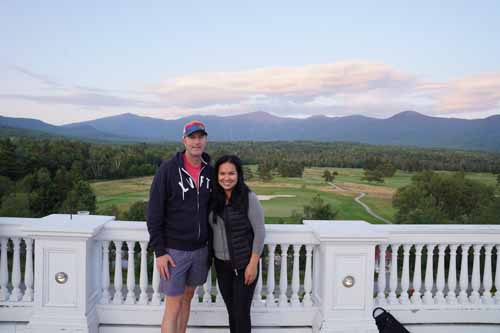 Not really knowing exactly how to find Sugarloaf 2 Campground nor our campsite, we followed the vague description provided by Greg which would have been much more simple in the day light.  As this was the 4th time camping this summer we had become experts, even in the dark, at setting up the tent.  This would be our first of five nights of camping and the only night in New Hampshire.  Greg and George were already conked out by the time we arrived at the camp site and without a good nights rest the night before passed out as soon as our heads hit the pillows.