The first is called is called the 50 States and DC Marathon Group.   This group is a little more specialized since you need to do the Marine Corps Marathon which counts as your 51st marathon.  Note:  You can't count the Marine Corps Marathon as your Virginia state.  The day I ran my first marathon in 1993 there were two finishers (finisher 25, 26).   23 years later I became the 496th finisher group finisher.  The group was founded in 1989.
Complete 50 State & DC Finisher List

While I came within minutes several times, I never actually ran a qualifying time for Boston, but was fortunate in 2004 to meet a gentleman while running in Huntsville, Alabama that is from Boston and said he could get me a charity bib number for my friends and I.   John & Todd and their wives join me and certainly this marathon ranked up there with one of my favorite marathon experiences.  Boston was my 35th marathon and 29th state on 4/17/06 and I was happy to break the 4 hour mark with a time of 3:57:28 (Age 37)

My 3rd hardest marathon was the run leg of in Idaho of Ironman CDA which took 6:05:05 and I had bonked because of the heat (Age 38)

5 of my marathons were Trail Marathons:
Michigan, Delaware, West Virginia, Wyoming (50k), Oregon (50K).   Alaska would be a sixth trail race, but was 50/50 road and trail.

Everyone always asked me my favorite brand of running shoes.   To the best of my ability of looking through old pictures my first 4 marathons I'm not sure I probably wore either Nike or Saucony, tho I went on and I think 38 marathons I wore Saucony.   I was a big fan of the Grid Hurricane and probably have tried every version of it and was always eager to try out the latest version.    For my 5 trail marathons, the first 4 I ran in a Northface trail shoe, and Wyoming 50k as well as Alaska I ran in the Brooks Cacadia's.   It wasn't unitl 2011 I started exploring some new brands.  Asics always claims to be the best selling running shoe, I tried them out for a couple of years and ran 2 marathons (13'-14') in them.  Nike is another super popular running shoe however I've only ever found one model that I liked for stability which was the Nike Equalon 4 and while had 2-3 pairs of this shoe which I loved training in I only ran 3 marathons with them (11', 2x 15').  A newer brand that I tried out was Hoka and actually only ran 1 marathon (16').    I went through at least 1-2 pairs of shoes every year, however, only a few people know that I had what I called my lucky pair of socks.   At one of the first marathon expo's I attended I picked up 1 or 2 pairs of this sock that I fell in love with.  One of them I trained in and wore out, but the 2nd pair I only broke out on race day and pretty sure they've seen at least 50 of my marathons (or over 1,300 miles) and believe it or not still have them today.

When GPS came out I started a little more accurately recording my training.   In 2016 I logged at least 631 running miles including two marathons for that year.    In 2017 I logged at least 675 miles and only ran 1 marathon that year.  Using this last two year average as I was older and trained less, figure over the 23 years the total of marathon racing was 1,493.4 miles and if I trained 650 miles every year which is a safe or low estimate I probably have ran over 15,000 miles.   Of course that's not to mention all the miles I put on the bike as it was my preferred cross training exercise.

I have several inspirational friends that helped me achieve my 50 state goal:

The second is my friend George, we met through a mutual friend Gregg in Montana.  The week before the Missoula marathon the three of us spent a week hiking in Glacier National Park and come race day Gregg split and left George and I to run the marathon, we hit it off and went on to run 8 states together.  Montana 13', Connecticut 14', Rhode Island 14', Wyoming 15', New Hampshire 15', Maine 15', Wisconsin 16', and Alaska 17'.    George is like me with a sense of adventure and packing as much as we can into a marathon weekend.  Two times I traveled to the east coast for back to back marathons and George ran the 13.1 mile course and helped get me to the next state and next race the following day.   Including we the 8 marathons, George & I also hiked 4 state highpoints (Mt Greylock -MA, Mt. Frissle - CT, Jerimoth Hill - RI, and Eagle Mountain - WI) together as well as visited a 5th highpoint (Mt. Washington - NH).   George also spent two weeks with Parisa & I exploring five different regions of Alaska.

A very special thanks to Parisa who was with me for nine of my finishes, several she was too young to remember.   Minnesota 05', Oregon 05', Washington 05', Massachusetts 06', Idaho 06' all in about her first year of life.  After that she was there for California 15', Wyoming 15', Vermont 16', and Alaska 17'.   When asked what was my favorite marathon it has to be state #50 when she mountain biked (for the first time) the entire 26.2 mile course along side of me providing me water as well as my own personal photographer every step of the way!

This was a promotional video released to promote the 2018 marathon and featured content from my race in 2017! 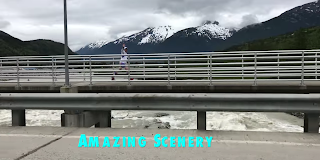 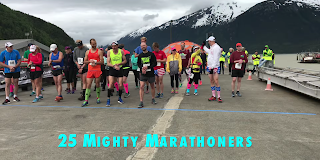 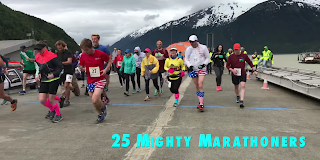 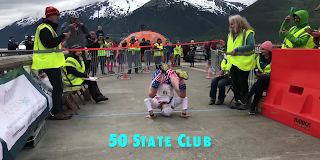 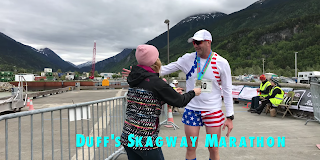 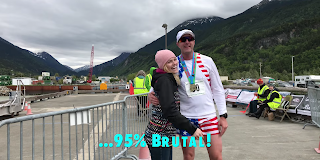 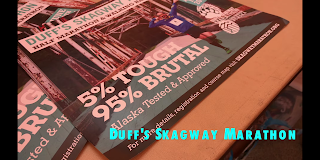 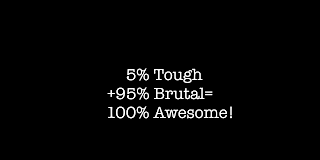 
“I finished my quest on June 10,” running in the Duff’s Skagway Marathon in and around Skagway, Alaska, he said.
“I felt like a rock star on the course. The race director surprised me with a big ‘50’” on his racing bib.
“I wore a star-spangled outfit, so I pretty much stood out in the crowd. I’ve run a lot of races and nowhere have spectators taken pictures of me… Every corner I turned, if someone had a camera, they were looking for me, screaming, and taking pictures.
“There is always a risk of bears in Alaska. This being a trail marathon, the risk was probably even higher.
“While I saw lots of bears while visiting Alaska, none were seen on the course.”
1,266th
Schweinhagen ran his first marathon in 1993, “way before I ever heard of the 50- state club. There were only 13 (50-state) finishers, a pretty elite crowd,” he said.
“In 1999, after I had finished five states, is probably the first time I was introduced to the notion of running a marathon in every state.
“At that time, there were only 70 (50-state) finishers.
“Fast forward 23 years, seven months, 18 days– I am the 1,266th ‘certified’ finisher.’
“Actually, each state was an adventure in itself. Most marathons were three-day weekends, so in the limited amount of time for each race I like to take in as much as I could in the city or state I visited.
“Of course, there were many states where there was a weeklong adventure as it transformed into a full-out vacation.
“Interestingly enough, as much as I traveled and as tired as I may have been from both the marathon running as well as the logistics getting home, I generally made it to work on Monday morning.”
When asked about marathons that stood out in his mind, he said there are many that are special.
“For example, Chicago is my personal record. Boston, well, is Boston,” he said.
“One of my favorites is Grandma’s Marathon in Duluth, Minn.
“The most challenging was the Pikes Peak Marathon in Colorado, where the 13.1- mile turnaround is on top of one of the highest peaks in the continental United States.
“I remember mile 12-13. With the elevation, that one mile took me 37 minutes.
“My first California marathon was through the California Redwoods. Each one has great memories.”
“People in different parts of the country were very different. For a race, the whole community comes together.
“Without many volunteers, none of this would be possible.”
Different
“Each race is way different. There are many things to consider including time of the year, temperature, logistics, course profile (hard/easy, hot/cold, flat/ mountains, elevation, etc).
“Every marathon I started I finished, but a handful of them I had my doubts.
“What’s interesting is the way everyone dresses at the start. For example, let’s take a marathon in the middle of the country like Kentucky or Virginia.
“You have the warmweathered people from places like Florida that are freezing and layered up, while you have others from colder northern states that show up in shorts and a tank top.
“All runners doing the same race, but each race is its own challenge just based on where you came from.”
Schweinhagen graduated from Bowling Green State University in 1991 with a computer science degree.
Today, he lives in Los Angeles,
Calif., with his wife Homeyra, and their daughter, Parisa, 12.
Parisa accompanied him to Skagway, riding a mountain bike along the entire 26.2-mile course.
Big Finish
At Skagway, Schweinhagen said he “wasn’t the first to cross the finish line, but they held up a pink ribbon for me at the finish.
“I have a ceremonial finish to a number of my races where I do a somersault across the finish line.
“I rolled across the finish line, actually going underneath the ribbon– so my only chance to break the ribbon and I failed!” 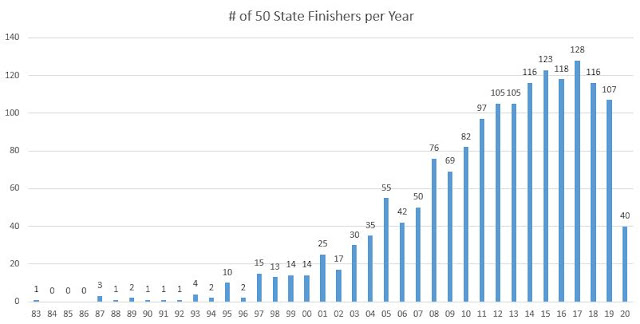 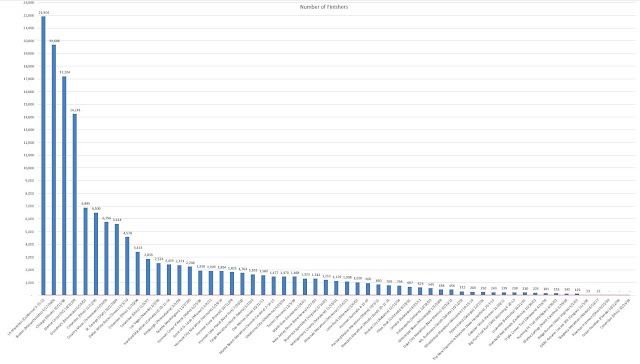