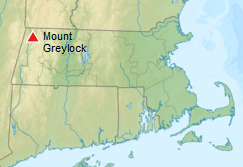 This adventure begins like other adventures of mine in which the high point of a state is in close proximity (sort of) to the main destination of the real adventure, in this case a double marathon weekend in the states of Connecticut and Rhode Island.   Note you may notice Mt. Greylock is actually in Massachusetts, however, not that far off the beaten path of the next closest high point of Connecticut.

While the double marathon was part of the original plan, this “add-on” idea of a highpoint adventure was actually a last minute, in that until a week out, this wasn’t part of the plan at all.   Last summer while hiking in Glacier National Park with my friend Greg, Greg introduced me to a new friend George whom we ran a marathon the last day of the Montana adventure.  Well, ends up I recruited George on the double marathon experience and knowing he’s also a hiker and might just be up to make the weekend a little more interesting.  The thought that he might actually be up for driving a few extra miles and tossing in a little bit of hiking on top of two marathons wouldn’t be out of the question!

The original plan was we were both to arrive in Boston on Thursday spend the night in the Boston area and see some of the historic sites in Boston before heading to Hartford.  It ends up that George was to arrive much earlier than my flight so I suggested instead of waiting for me for 5-6 hours at the airport that he go into Boston and check out the town for himself.   I’d been there in 2006 for the Boston Marathon and seen a little bit of the town and would have another chance on Monday the last day of the weekend, so I suggested a deviation of our original plan and that we try to hit a few state highpoints, at least two if not three!

If my calculations were good, I figured if we could get within an hour of Mt. Greylock Thursday night we could get up and drive to the summit, head on down to Mt. Frissle in Connecticut and still make it to the marathon expo before it closed.    George was game so the ball was in motion to make it happen. 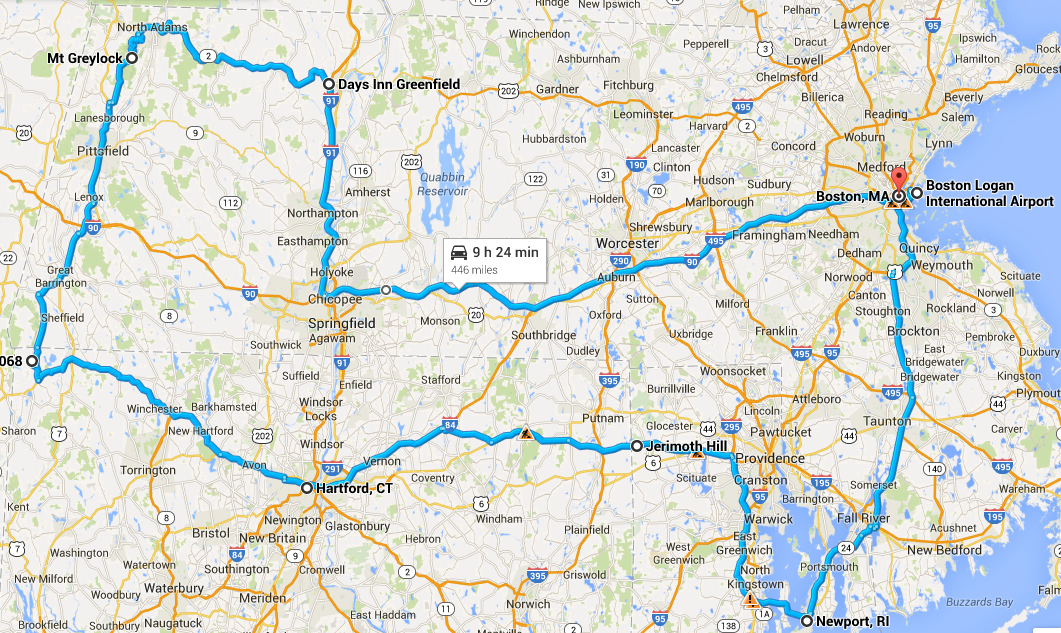 I landed about 9pm so after driving about 3 hours by midnight we found a hotel in the middle of nowhere (Greenfield, MA) to spend the night.    There were a couple other routes from Boston to Mt. Greylock, but we choose the path at night that made the best use of the interstate and left us a loop tp drive to our 2nd destination so that we wouldn’t have to see the same sights twice.  I was still on PST time so it was only 9pm for my body’s time clock, yet still a little tired after the long flight.   Even on PST, as soon as we reached our hotel and lights were out so was I.

Friday morning after diving into the hardly desirable continental breakfast provided by the Days Inn we were back on the road early to head to our first destination, Mt. Greylock, the highpoint of Massachusetts.   I couldn’t see anything Thursday night in the dark so in the morning I was delighted to see all the fall colors on the trees. Having left the Midwest nearly 10 years ago it had been a while since I’d really been able to take advantage of the tree’s fall colors.  The route to the highpoint took us all along a scenic highway.   I should have snapped a few pictures but would have run my camera battery down before we even made it to our first attraction.  Route 2 east wound along a river and was simply lovely.   Eventually we found route 7 south and were quickly approaching the road up to Mt. Greylock. 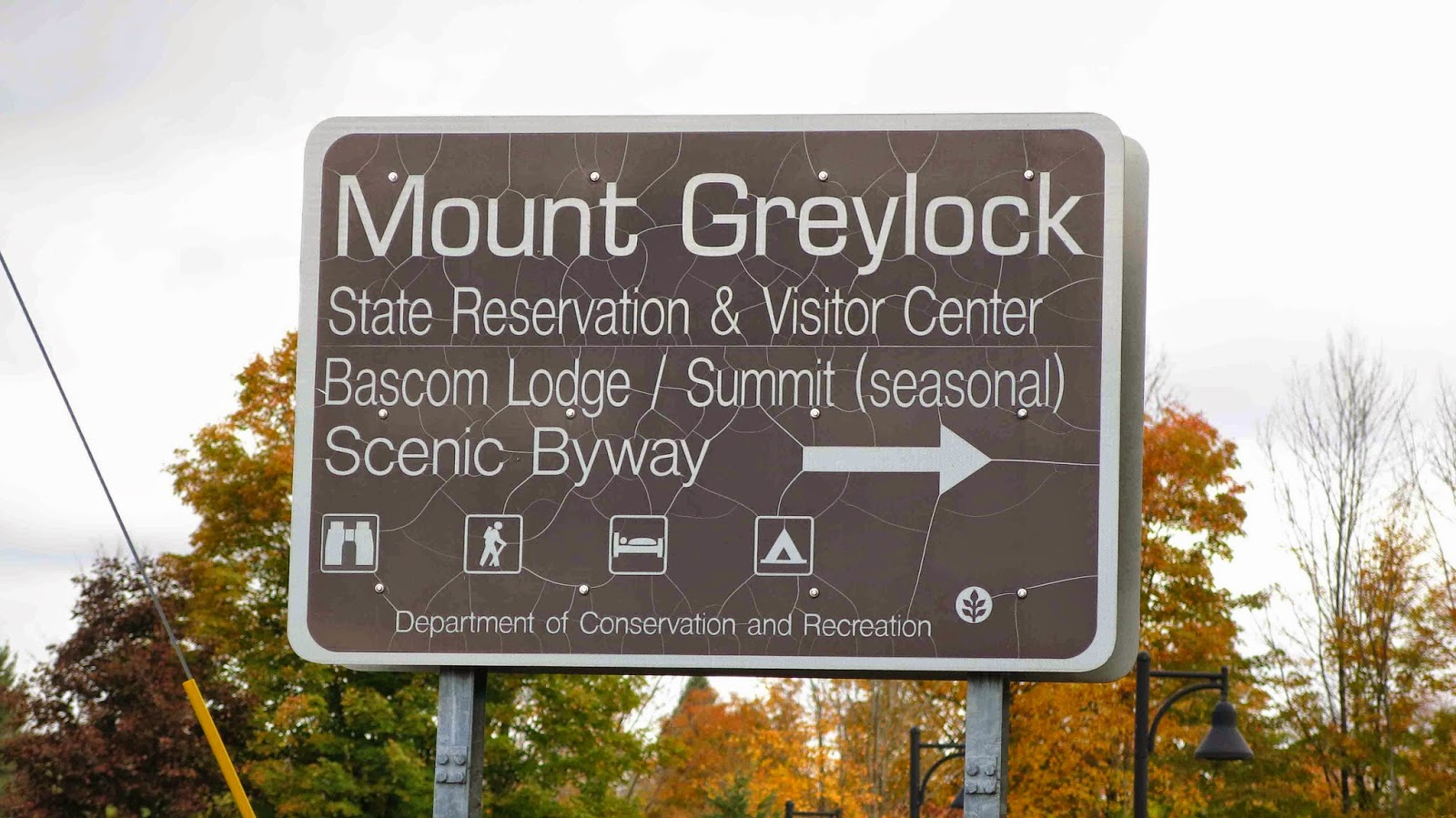 A storm was brewing and clouds overhead were moving fast, but that didn’t stop us from heading up the park road towards the summit.   The conditions on the road up to Mt. Greylock cause the road to be closed after the weather changes about the first of November, but we were lucky just to have a few clouds and just a bit wind to tend with.  Mt. Greylock is actually has a Veterans War Memorial, a giant tower on the summit.   We passed the visitor’s center toward the bottom of the summit road and then continued up the 7 mile route all the way to the summit. 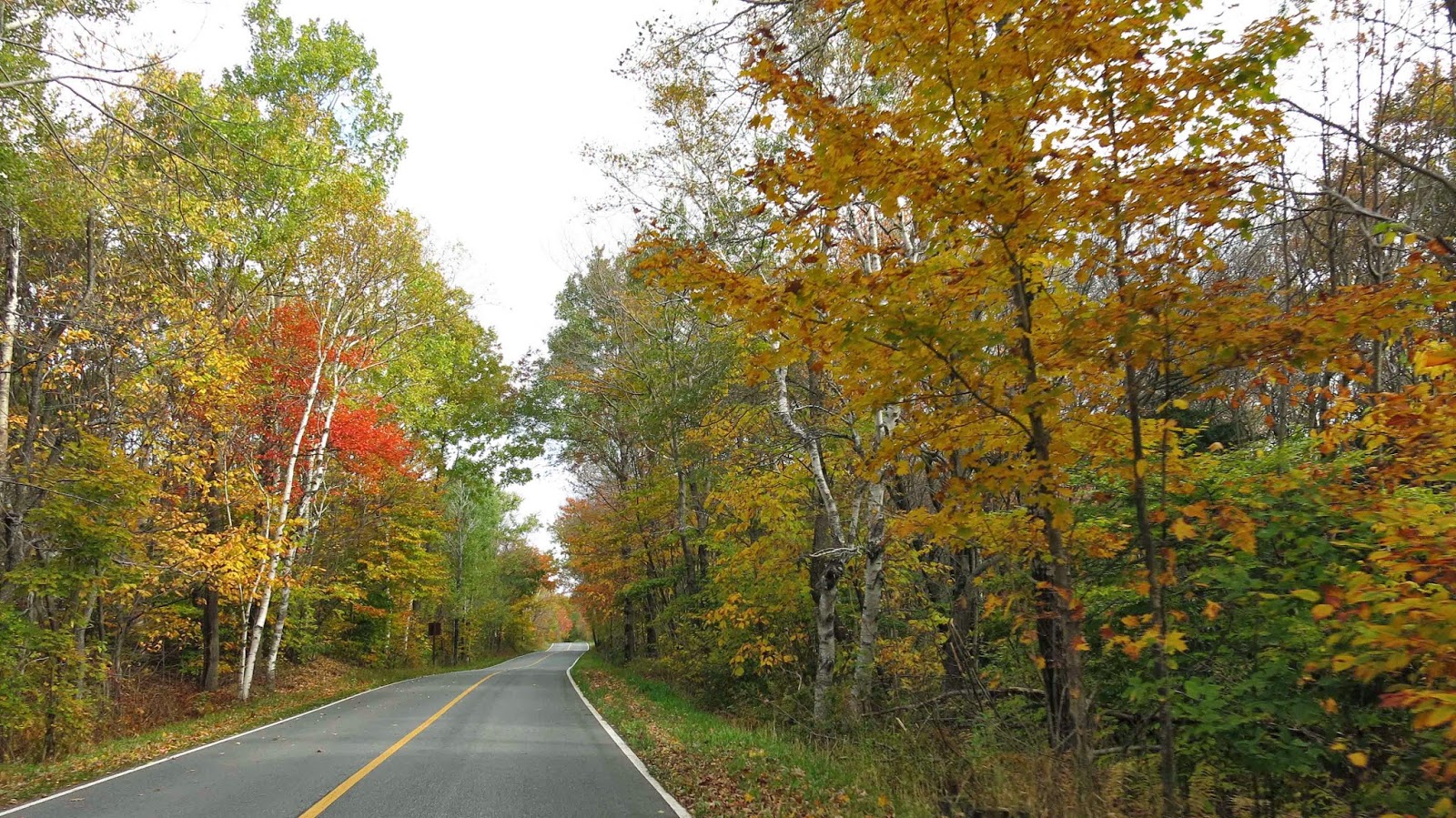 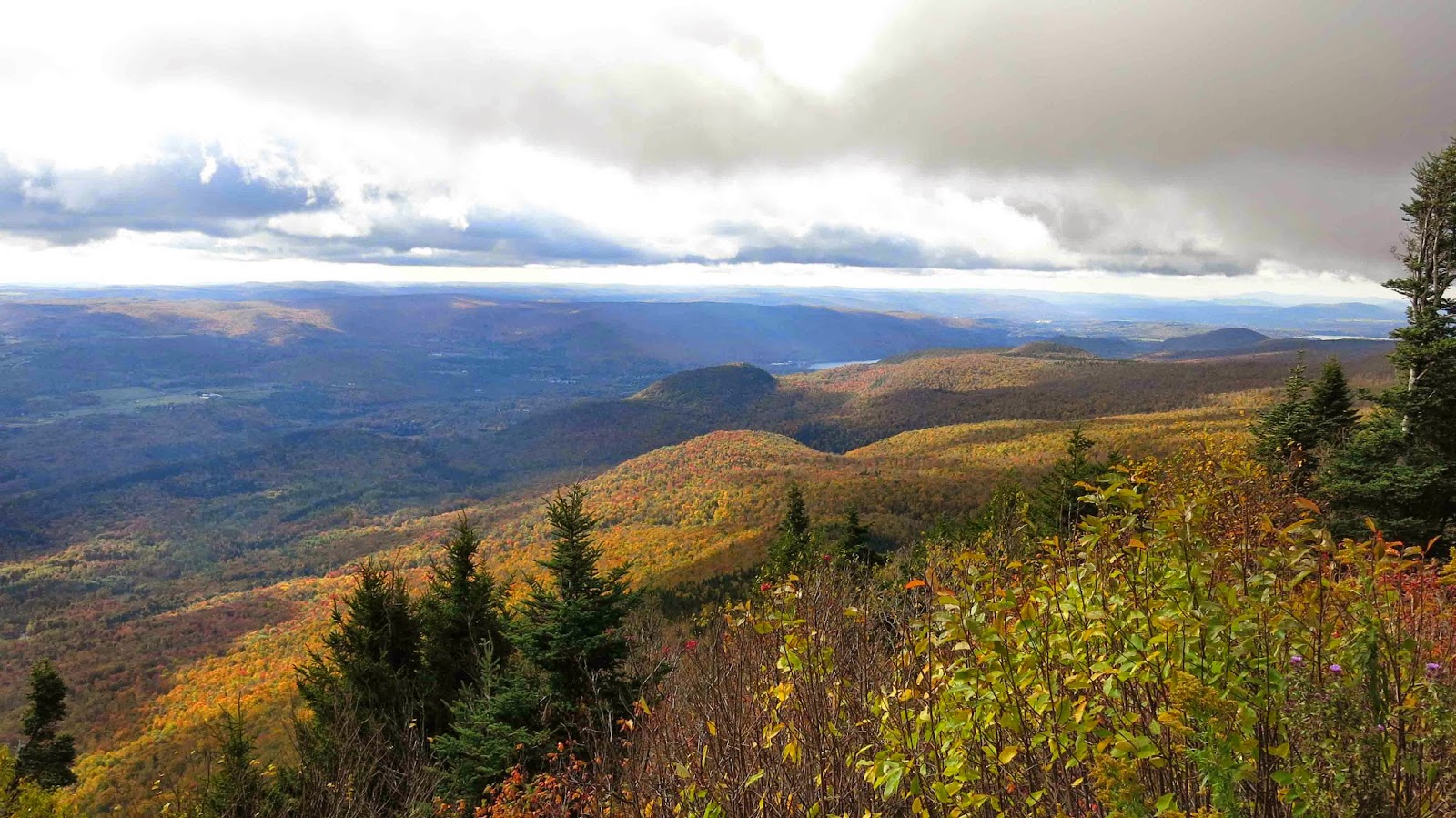 We took in a couple great views on the way towards the summit where we stopped to snap a few pictures.   Later we would stop at other viewpoints on the way back down!   While 3,591 ft hardly seems high for west coast standards, it was high enough that the wind and cold was immediately apparent as soon as we opened the door of the car.   I tossed on a jacket and headed up to the monument with camera in hand. 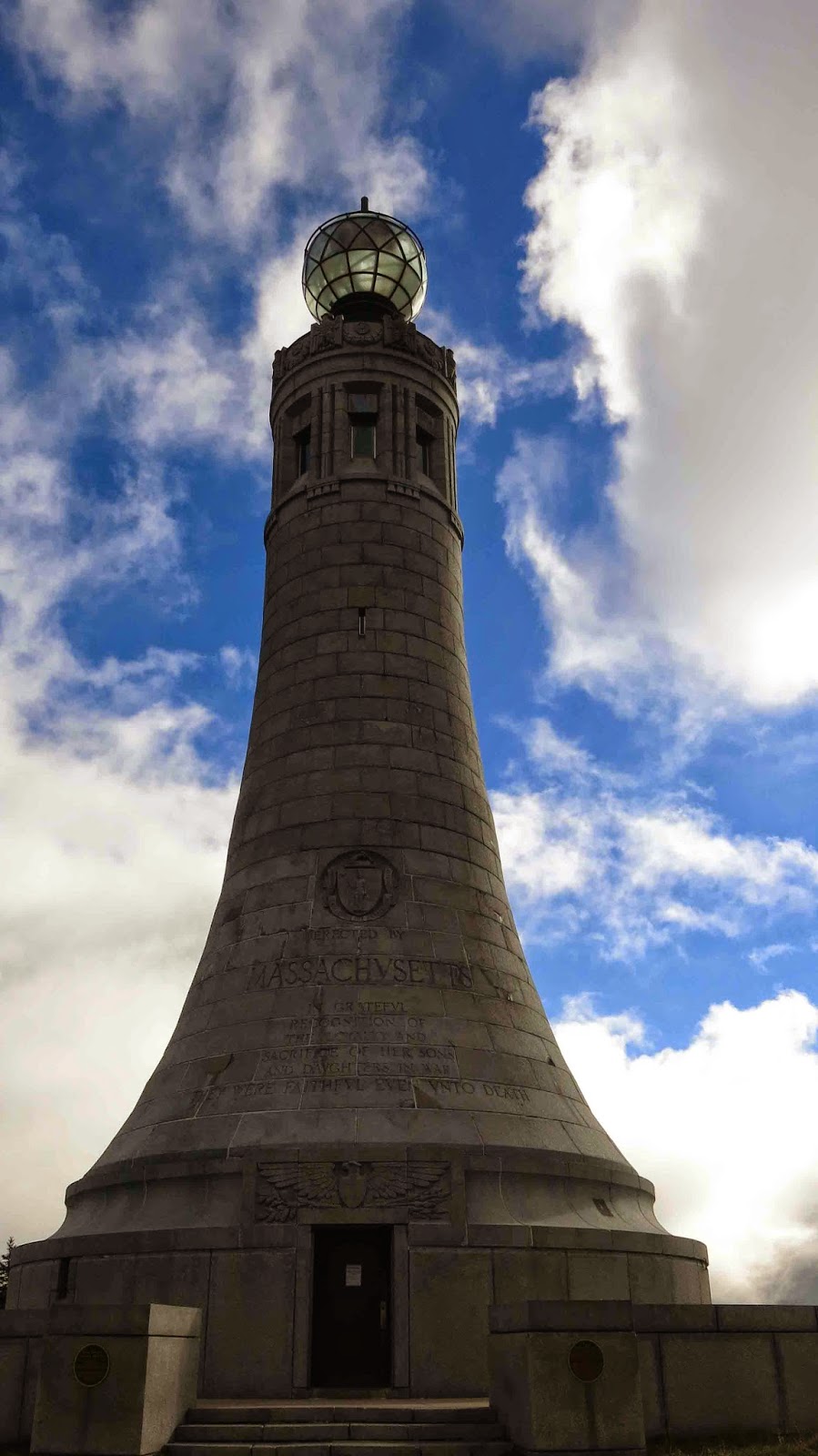 Making our way around the memorial we had a panoramic view of our surroundings.  Not the best timing in that the memorial was under construction so we could only enjoy the structure itself as well as the view from the mountain summit, however had the memorial been open it would have been grand to climb the stairs to the top and look out from the observation deck.   On a clear day 5 states can be seen from the summit (CT, MA, NY, VT, and NH). 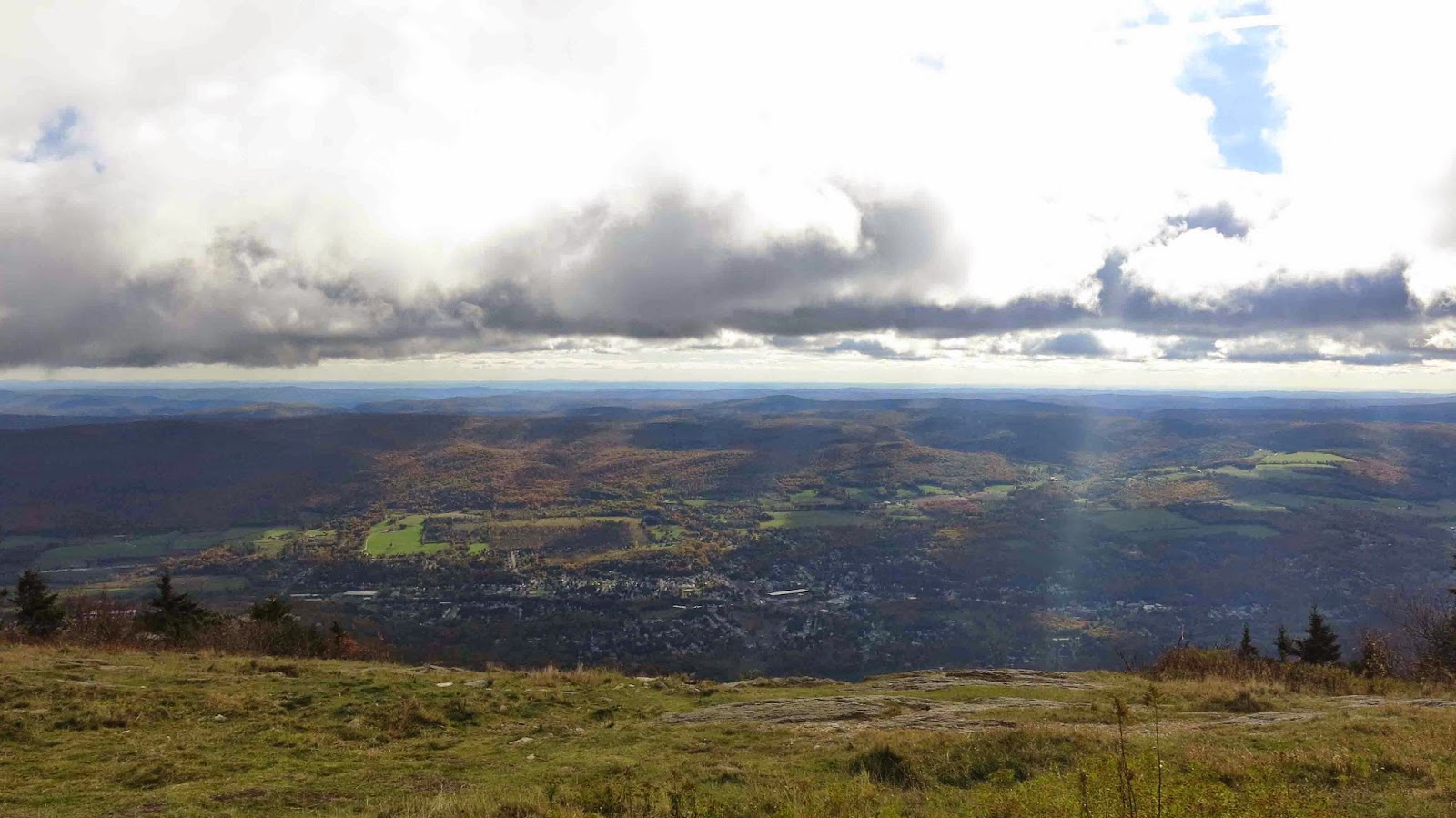 We made our way back down the way we came up with a brief stop at the visitor’s center.   The visitor’s station was nicely done with gauges of the weather conditions at the summit as well as a park ranger to answer questions.  The museum had some great all season pictures of the summit which looks like the summit really gets blasted in the winter and no doubt why the road closes to the summit for the winter.  I suppose we were lucky to catch the very end of the season and get to see take in the sights before the weather was to soon turn more nasty. 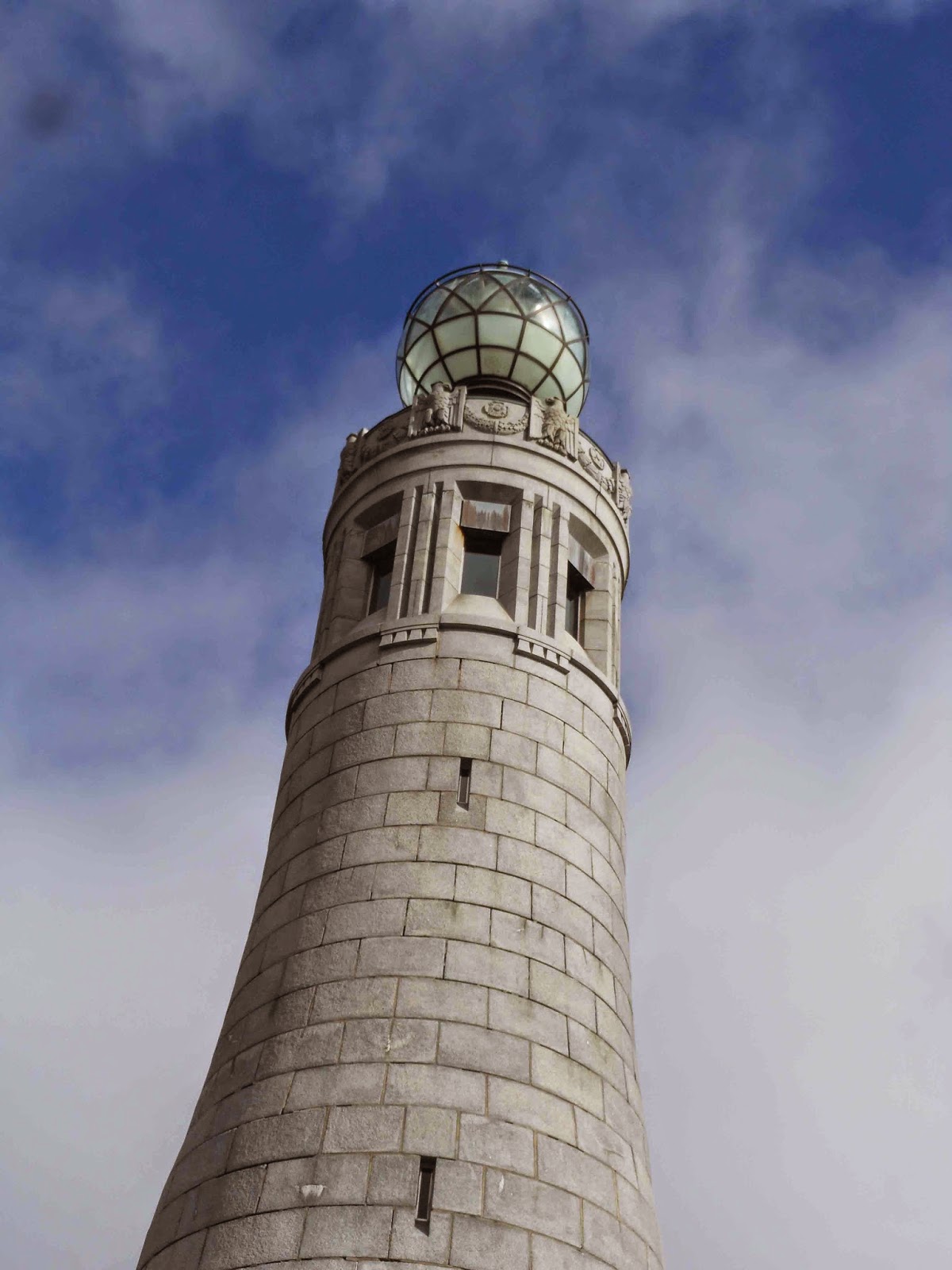 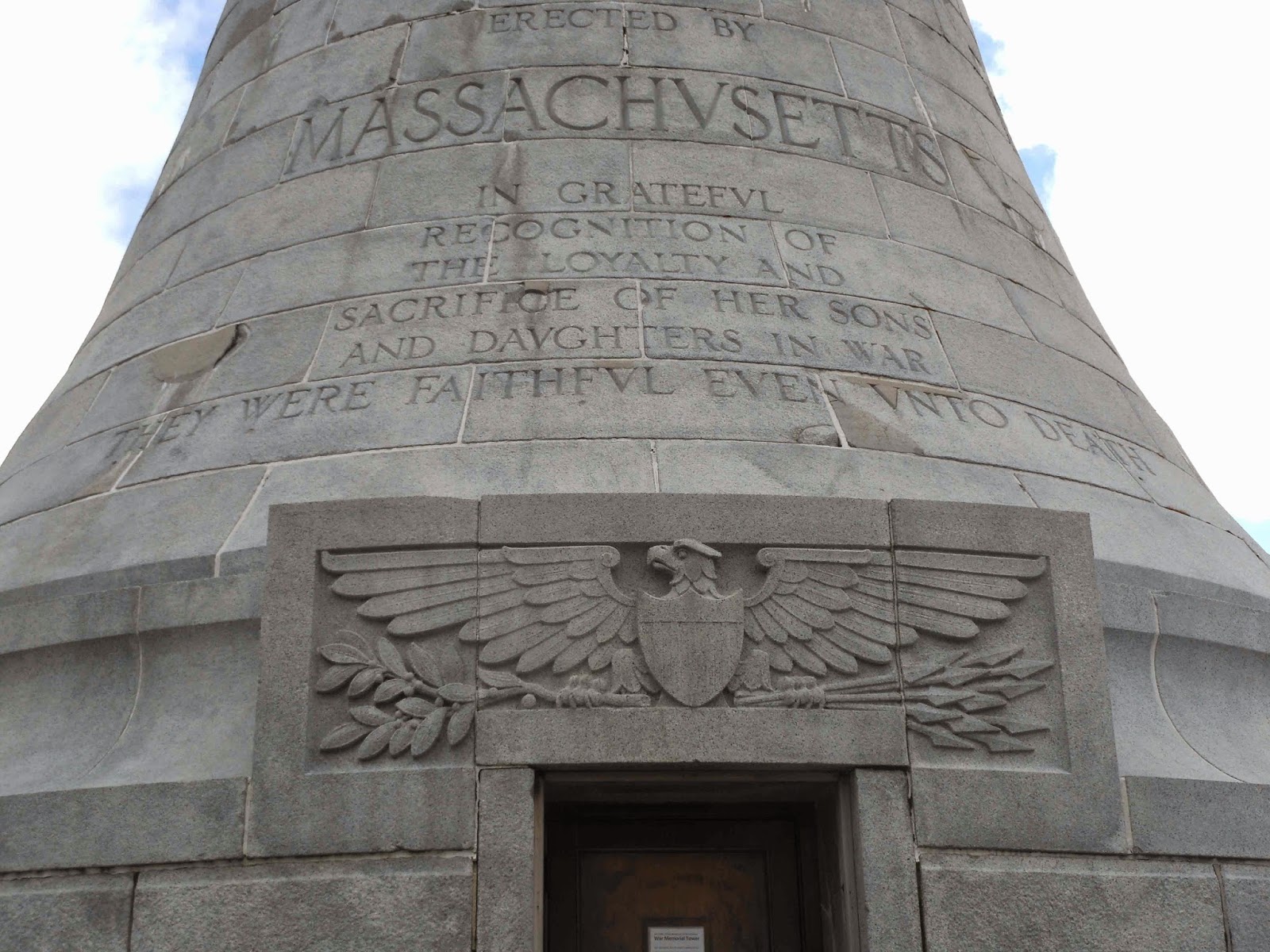 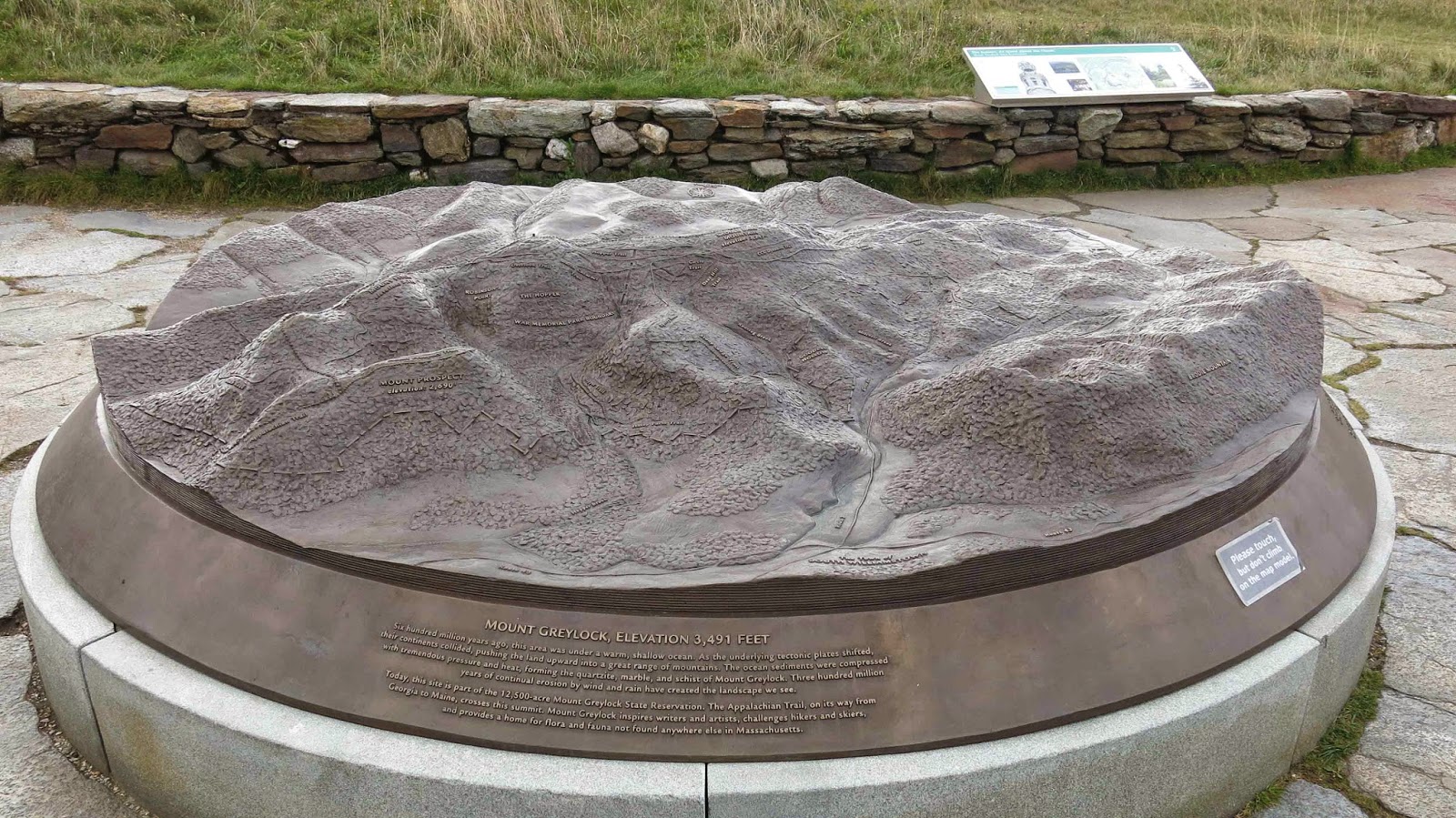 While the highpoint of Massachusetts was obviously a big tourist attraction, when we asked the park ranger at the visitor center for information on the highpoint of Connecticut I was surprised when the ranger neither knew where it was, how long a drive, or any other details about it.