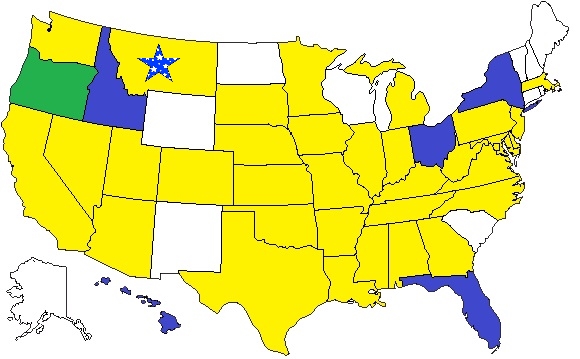 Mostly every marathon up to this point has a marathon destination trip, that is, fly in and out for the race, maybe see a few sights nearby as time permits, then fly home immediately after the race.   Montana took on a life of it's own and up this point has become one of my favorite marathon vacations as I flew in eight days before the marathon and was fortunate to have spent nearly a week in the nearby Glacier National Park. 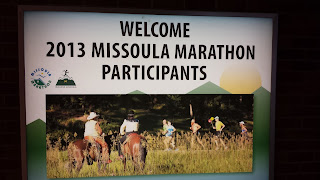 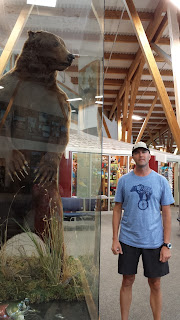 If you know me, to say that I have an desire for adventure is is an understatement.  I have a long term friend I met in Columbus, Ohio and in many ways he's my hero.   When I first met Greg in the mid 90's, he had already been to Kona for the Ironman Triathlon World Championship and was in the middle of a cross country bicycle trek when he pedaled out of his way to stop in Columbus for a burrito with some mutual friend of my triathlon club.   We kept in the same social circle, worked out at the same gym, and so we got to know each other.  In 2001, we both had signed up for Pike's Peak Marathon which was a grueling marathon which half way point is at the summit of one Colorado's 14'ers with an elevation of 14,411.   While we traveled separately to Colorado, we both climbed the high point of Colorado Mt. Elbert (14,433) a few days prior to the marathon.  Even though I eventually moved to California, we stayed in touch as we both wanted to climb Mt. Whitney (14,497), the highest point in California.  We were able to coordinate schedules and in 2009 summit-ed together.

Greg had been to Glacier before and I know it's on top of his list of places he's been so we began planning to incorporate a week in the park prior to the marathon.   My trips are usually short and sweet, but Greg has the ability to take more time and usually plans more activities and this adventure was no different.   He would arrive two weeks earlier with a friend of his George and they were going to take rafts down the Hell's Canyon on the snake river.  I would connect with the two of them at the end of their  river adventure in Missoula, a week before the marathon.   We all rolled into Missoula about dinner time and what better place to meet up than a local pub/restaurant called the Iron Horse where we all caught up and shared a few Big Sky Brewery's finest!

I had the best tour guide ever for Glacier and you can read all about my week long adventure in another one of my blogs.   https://gulplife.blogspot.com/2013/09/glacier-national-park.html

I should write a book on how not to taper the week before a marathon, that is, the five days preceding race day we ended up hiking eight different trails totaling 37 miles.   The final day in Glacier there was one last trail that Greg wanted to do called the Highline Trail which had still been snow covered an impassable all week, but we learned it was opened and Greg, who wasn't running the marathon, wanted to do it.  It was only 7.6 miles one way downhill, but already sore from the previous days of hiking the sensible part of me said it was time to take a day off, George who was also running the marathon agreed, so we waited at at Lake McDonald Lodge for Greg to make the solo journey.   He finally arrived and invigorated from the experience and while he probably missed us on the trail, we were assured it was a good thing we rested.  I hope to make it back someday to Glacier National Park and this hike will be top of the list!

We made the two and a half hour drive back to Missoula from Glacier National Park and enjoyed the scenery and of course all the laughs all the way back.   At bedtime we said our goodbyes because Greg would be on the road driving back to Ohio at wee hours of the morning which left just George and I.    This marathon will be my 39th state marathon on my quest for all 50 however it I don't remember the actual count, but I think it was near Goerge's 70th marathon, not to mention a long list of other ultras he has completed.  I'm not often in the company with anyone with more running experience than myself so while strangers less than a week ago we found we have a lot in common and seemed to get along great.   We were both pretty laid back and were both agreeable to whatever the other wanted to do. 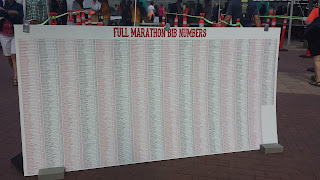 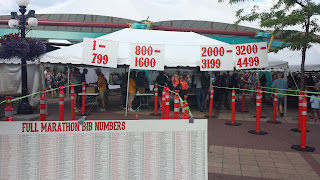 We hadn't run in over a week which is probably another non-recommended pre marathon recommendation, so I think he talked me into a short run to loosen up the legs, also a great way to see more of the town.   Next stop was the marathon expo.  Like any race weather can make or break any race experience, especially, all the way north in Montana you never know what to expect however race weekend couldn't be any more perfect, even an outside expo combined with a farmers market where we headed to pick up our race packets. 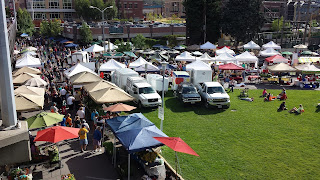 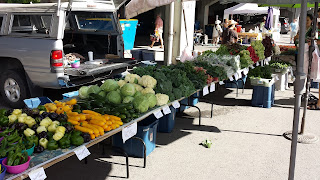 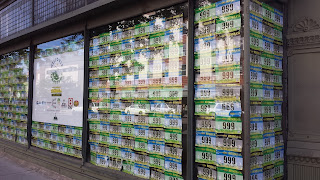 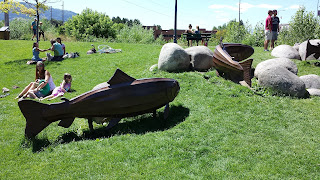 Also at the race expo was the legendary Jeff Galloway as a guest speaker.  George and I kicked back in the park and listened to Jeff's marathon experience and recommendations. 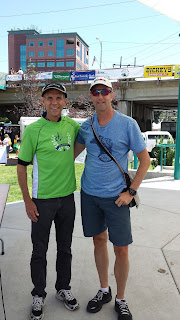 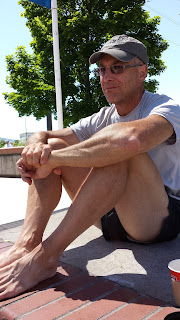 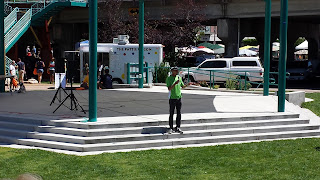 Many of my marathon weekends have been solo journeys so it was great to have my new friend George to share the experience.  My other good marathon buddy John we hadn't run together since January of 2008, over five years had passed.  We've kept in touch and tried a couple times to coordinate schedules but nothing seemed to work out.   I usually would have shared with John where I was racing and I would get an email or text of encouragement tho while at the race expo my phone rang and I was surprised by an actual rare phone call from John, once again, wishing me good luck.  We hadn't talked for a while but I could sense on the phone something was out of the usual with his questioning where I was and low and behold, he was right behind me and surprised me flying in day before race day with his family to run!   I think they were tired from their travels so we would all meet for dinner at the Olive Garden and catch up. 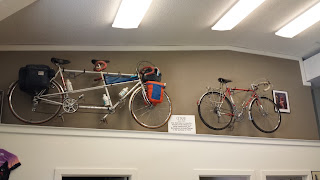 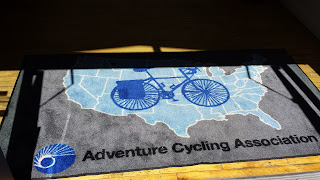 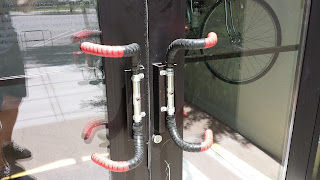 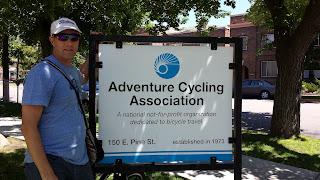 Missoula was a cool western town and had a large population of  hippies roaming through the area.  We discovered Missoula is the hometown of the Adventure Cycling Association which has a small office and museum so we paid a visit. 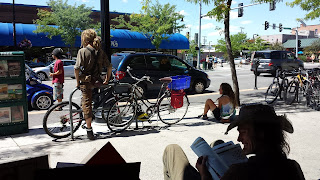 I think George had been thinking about an iPad for sometime so we made an afternoon stop at Best Buy followed by the afternoon in a coffee shop downtown setting it up as well as kicking back and relaxing and writing out my blog for the week in Glacier National Park.    Dinner was great, we shared about our week in Glacier as well as how life has been living in California.  We made plans to meet at the bus stop in the morning for the shuttles to the race start 20 some miles outside of Missoula.   We didn't have a continental breakfast at our hotel so one last stop before race day was at a local supermarket.  It's pretty funny as George and I walk in and head in opposite directions we both show up at the cash register with the exact same items, a bagel, energy bar, orange juice, yogert, and a Red Bull for after the race.

Race morning and we were off to the start of the race.   I'm pretty consistent in coming in right around the 4 hour mark so that always seems to be my goal to break the 4 hours mark.   The course gains about 500 feet from start to finish with one substantial hill miles 13-15 combined at 3,350 feet I could probably feel a little of the altitude which would help to make this course a challenge to reach my goal, not to mention a week of hiking for my pre-race plan.   It was a little cold at race start so I think we walked down to a local carryout to stay inside as long as we could as well as use their facility that trumps the port-o-potties.   There would be fireworks to start the race and then we were off heading back to Missoula on the point to point course. 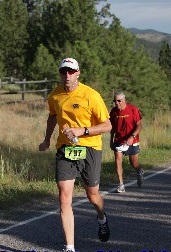 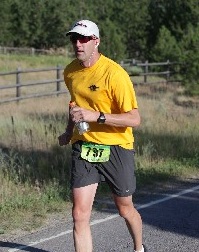 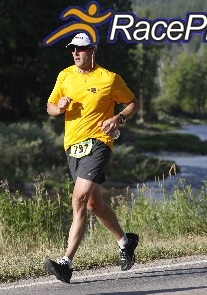 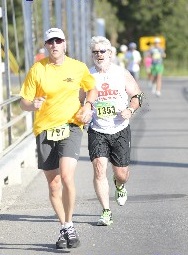 The course was beautiful as the morning sun glistened off the sprinklers in the rolling fields.  I ran solid and consistent mile splits throughout the entire race.  I do remember it heating up once we were getting closer to town and keeping a close eye on the time I knew I would have to haul ass to get in under the 4 hour mark and my last mile I had to run under a 8 minute mile which isn't always the easiest to do after 25 miles already done, but I picked up the pace and finished 3:59:24.   A few minutes later George crossed the finish line and we waited for finally John to finish! 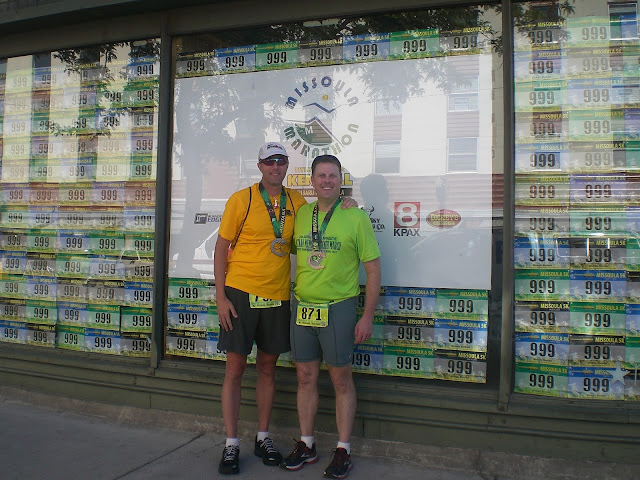 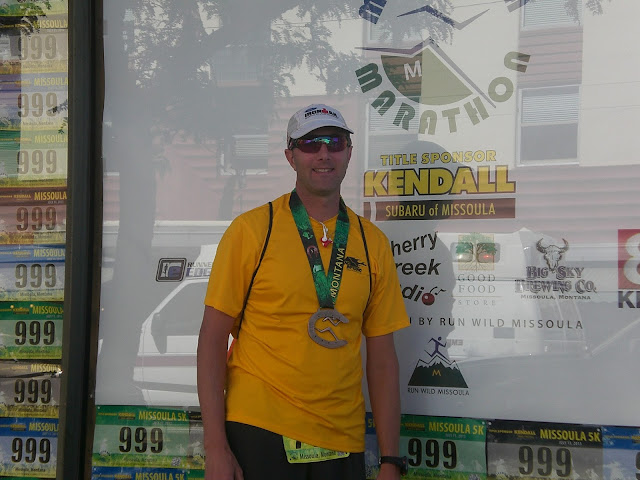 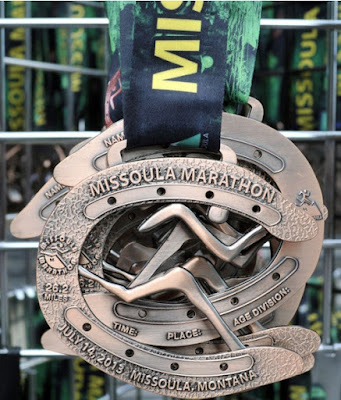 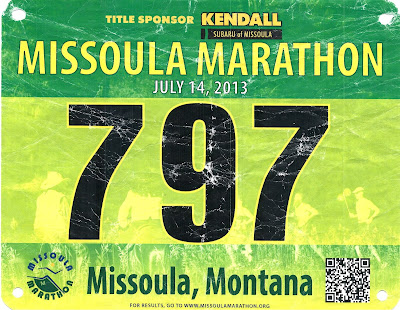 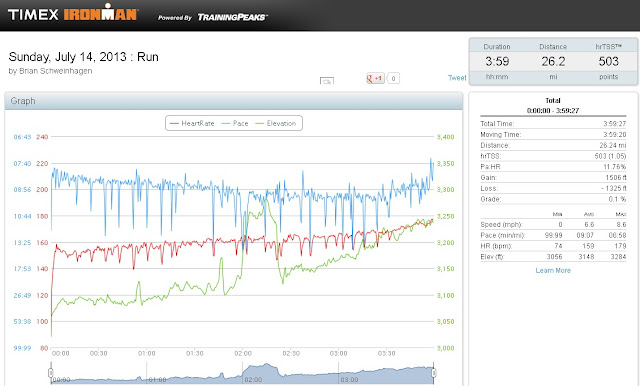