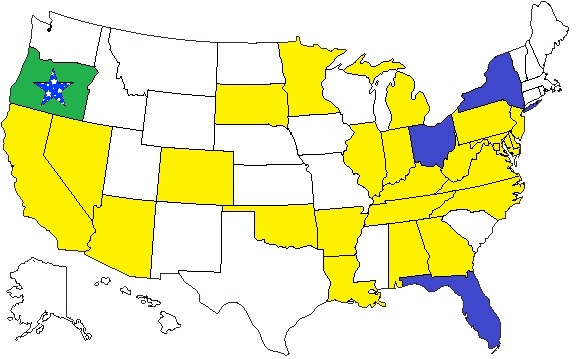 This marathon was sort of a spur of the moment decision.  I traveled to Portland several weeks before this ultra for the Portland Marathon which I didn't run, but worked the at the expo at the Marathon Geeks table.  I met Celia from the Oregon Road Runners Club and she invited me down for to run one of her events. 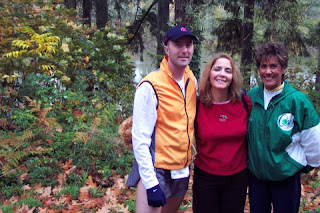 There were many factors that led me to decide to run this event.  First, I really wanted to complete my west coast states while living in Seattle.  Secondly, I was already in shape since I was preparing for Seattle marathon in a few weeks and made for a perfect long training run.  Thirdly, since I didn't get to run Portland while in town only a few weeks back. additionally I knew 06' would be busy with my Ironman's interfering with the two marathons in Oregon I've considered for 06' (Crater Lake or Portland) the timing couldn't have been more perfect.   Fourth, I had never run and ultra and thought, "what the hell."  Lastly because I got a complimentary entry from my contact at Oregon Road Runners Club. 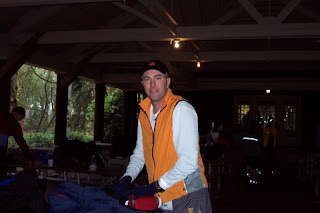 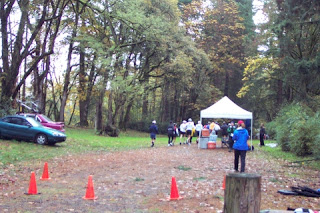 Homerya, Parisa & left Seattle Friday afternoon getting stuck in heavy traffic which the normal 3-3.5 hour trip took 5.5-6 hours.  We got a hotel close by in Wilsonville and called Celia to join us for dinner at Chili's.  There were multiple start times for the three events, 13.1, 50k, and 50 mile.  I decided before sleep to shoot for the 9 a.m. start.  We got a late start with Parisa tagging along, so I showed up to the park with only minutes to spare.  I checked in and made it to the start line is less than 5 minutes, pausing briefly for a start photo. 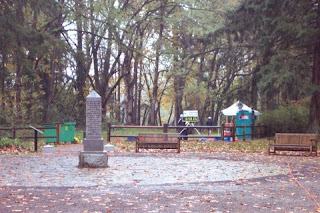 The morning of the race the clouds were heavy, but it was barely a drizzle.  Within the first 5 miles the rain began and didn't let up the entire 31 miles!  Fortunately because of the race course design of 6 5-mile loops I was able to change to dry clothes each loop.   I ran the first 26 miles in my gortex trail shoes which I'd never run that long before and my feet were getting sore.  I reserved a dry pair of shoes with my last change of cloths at mile 26.  It felt great to have new shoes, but by this time it was a steady down pour and my dry shoes barely lasted a mile into my last loop.  I had run most of the race with two guys from Oregon, Mark (a marathon maniac) and Trey.  I hadn't had a long training run over 13 miles since Grandma's marathon, so I began to slow down my 5th lap.  I got to the 28 mile mark at approx 4:30 and made a conscious decision to try to break 5 hours.  I busted ass and probably ran better than 8 minutes miles my last 3 miles.  I pushed hard and it hurt, but was worth it.  A couple from Portland that passed me in the 5th lap I finally caught up to and whizzed by.   They both congratulated me at the end of the race as they appeared to slow down. 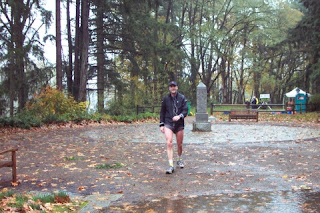 Homeyra and Parisa had returned from the warm dry hotel and were at the finish line to greet me.  As small of an event as this was, there was still chiropractic massage and minor adjustments at the end underneath the shelter.   There was hot chocolate and hot chicken noodle soup to warm your bones as well as a 6 foot subway like sub, and variety of other snacks and treats! 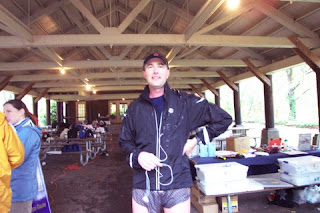 We headed from the race to downtown Portland and did some shopping.  Homeyra was excited to see the whole state of Oregon is sales tax free!  We ventured to my friend and fraternity brother Tim's home for the night.  He took us to a great restaurant in Beaverton called Beaches.  By this time we were all exhausted and headed back to his place for the night. 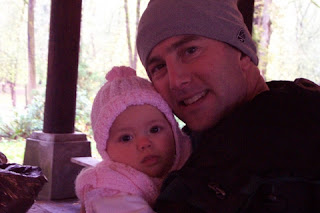 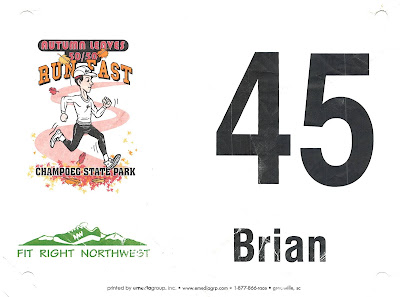 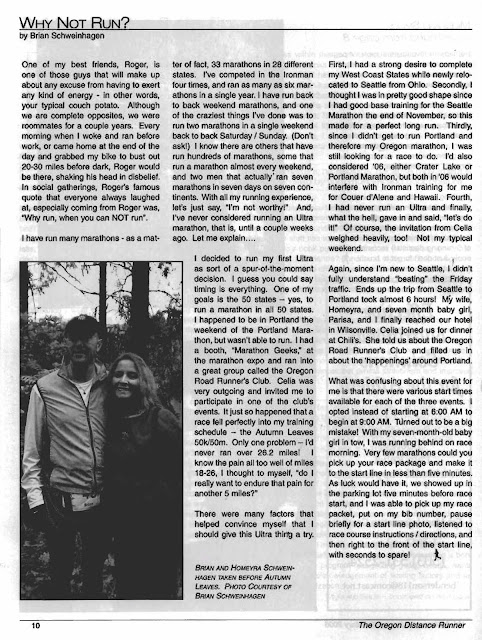