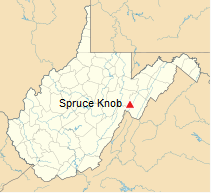 After spending the night in Elkins, WV we woke to travel to Seneca Rocks. At a little general store on the corner that you could see Seneca Rocks, we learned that the pass was closed to Spruce Knob (4,861). We decided to hike at Seneca Rocks before driving around the other side of the mountain to another road that goes to the top of Spruce Knob. Seneca Rocks is a famous place for climbers. In going around the right side of the rocks we took the east trail up the rear side. We had a blast climbing to the top, not knowing we would soon reach the summit. What excitement it was to reach the very top and see the view. The east side was very warmed by the sun. In December we would have never expected near 70 degree weather. After reaching the top we sat on the highest point and ate a snack that I had carried up in a small back pack. We tried to take a more challenging route down and talk to some of the climbers, but soon realized we were over our heads and didn't have the right equipment so continued back down the way we came up.

The adventure continues going to Spruce Knob. The back way up involved approximately a 20 mile unimproved road that was covered with snow in many spots. The Subaru SVX climbed the mountain with little to fear. The car was absolutely filthy by the time we got to the top. With only a few pictures remaining we got shots for the scrapbook. We enjoyed talking to a couple that I saw at the General Store from Charleston and another couple that had been back packing for several days. We found the maker near an observation tower. We enjoyed a ½ mile hike around a path at the top of the mountain. I learned about the pines growing only on one side of the tree because of the winds. The drive back down was fun too stopping to throw rocks at some huge icicles along the river. The drive up and down the mountain was very scenic with many trails to hike. 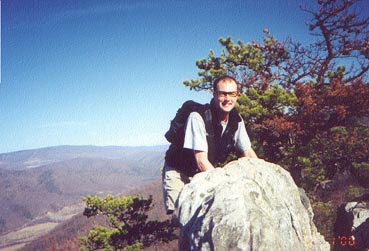 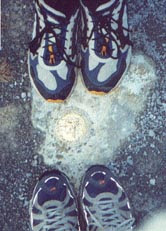