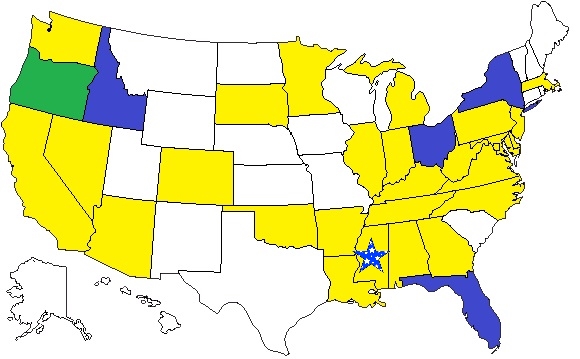 2006-2008 I found myself at a cross roads with my pursuit of 50 state marathons.  My last marathon, State #30, was in way back in June of 2006 where I competed in Ironman Coeur d'Alene which was a grueling race on a scorching hot day which I had to dig deep to finish.

Since my first marathon in 1993 I had run at least one marathon every year for 14 years straight, however, in 2007 I made the big move from the Seattle to Los Angeles.  I had only been in Seattle for two years and was successful at running marathons (or greater) in the 3 closest states (Washington, Oregon - 50k, and Idaho - Ironman)   A move to a new city from a business stand point was like starting a career over, so in essence my expenses were at an all time high and income was barely keeping up.  Besides not having much disposable income I found myself in a new town with 100's of adventures nearby awaiting, not to mention trying to search for a home.

Before I knew it, 2007 had come and was almost gone and I think it was about October where I realized I needed to set my sites on a new state.   We had family coming to visit over Christmas so it was looking like I would have to start looking into 2008 to plan my next marathon.   There is a series of races that are very popular called the Rock-n-Roll series which are in multiple cities.   Prior to R&R buying out the Country Music Marathon, which I ran it's inaugural year in 2000, a similar race popped up on the radar which would make it's inaugural appearance the first week of 2008.   What could be better that starting off the first week of 2008 with a marathon, nearly making up for a marathon free 2007 for me?

I shared the idea with my good friend John and he was on board to try to also get in shape and join me.  Mississippi would make our 8th state marathon together.  Our first race together was our hometown at the time of Columbus (Ohio 93'), and or our next 5 marathons we traveled from Ohio together. (Arizona 99', Tennessee 00', Oklahoma 04', Alabama 04', Arkansas 05')  Most recently, our 6th time traveling for a race together I actually met John in Boston (Massachusetts 06') in which I had to travel all the way across the country from Seattle.  This race would be my first race meeting John where I originated from my new home in sunny California.

Saving for a home and on a very tight budget, it didn't look like there there was a cheap priced flight option to get to Jackson, Mississippi and at first I didn't know if I would be able to swing it.   Apparently still holiday rates as a airline tickets initially showed a price of  $933 round trip but later was able to figure out I flew red-eye I could make the trip for $446.60 thru Dallas Fort Worth.   Parisa and my wife had traveled with me every single race since she was born in 2005 (Minnesota, Oregon, Washington, Massachusetts, and Idaho), but we decided I would fly solo for this one and meet John and his wife in Mississippi.

After 1.5 years of not running a marathon, I knew I had some work to get ready for this race.  I may not always have a conventional training routine as I like to mix in cycling & often substitute a long bike with equivalent time in the saddle in place of long runs.   I had just got a new carbon Trek Madone so I was both eager to ride it as well as explore my new S. California landscape.   I was living in Diamond Bar at the time, so there was no lack of hills to run for my training which is good because Mississippi seemed as if it would be a hilly course.

Over Christmas the week before the race we had company and my brother-in-law was visiting including bringing his bike so he could escape Columbus cold and we would be able to ride.  He wanted to ride 100 miles a day for 5 days which he's used to flatter routes so the time he's used to riding for that distance is less.   What ended up is we rode for 3 days, took 1 day off, and then road the 5th day.  We did get some serious miles including the first day around home in the Diamond Bar Hills.  The second day we biked from Anaheim over 100 miles to Sea World in San Diego along the Pacific Coast Highway, the 3rd day we had a challenge to ride to the top of Palomar Mountain and then the final day my first ride up Glendora Mountain Road.

I started the weekend with a red-eye flight which totally hampered my sleep schedule.  The good news is that I arrive early Thursday in Jackson by 10:00 a.m.   The host hotel called the Cabot Lodge had the tiny marathon expo in a small area in the lobby.  I didn't need a room all to myself so in order to save a little money I actually posted on a marathon chat board that I had a room booked and was happy to split the room with another runner.  I never found a taker, however, news traveled fast and I later heard from another running friend that I was running Mississippi because someone had seen my roommate request.  Small world?  We had 3 nights booked at the Cabot Lodge, but not finding it satisfactory, we found out there was a Drury Inn that had recently been built that didn't look like it could disappoint so we cancelled our next two nights at the Cabot Lodge and moved into the Drury.  Loved the fresh baked chocolate chip cookies for "happy hour" and of course the bundled breakfast buffet.   My first time at this chain but they seem to be pretty popular around the south so wouldn't be the last as I would seek them out in the future if available. 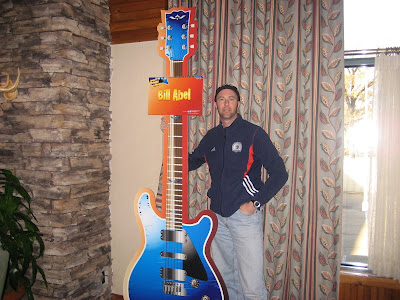 Being the first year for the race I didn't know what to expect as far as size of the race, but there ended up there would be 458 finishers.   There were more half marathoners than full which I was starting to notice was more and more common to be outnumbered.   A nice goodie bag included a long sleeve technical shirt, a blues music CD, and a pair of sunglasses. 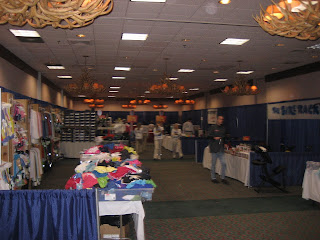 One of the exciting things that happened is that I met a couple legends including Steve Boone who founded the 50 States Marathon Club.   I think at the time he was somewhere around 700 marathons!  After Mississippi I knew I had to stay on a two marathon per year streak if I was going to close down my goal of finishing 50 states before I turned 50.   The only other race on my radar hopefully in the fall was St. George Utah which I could drive to from Los Angeles.  It would end up this race would even be postponed until 2009 because of some other exciting news in 2008 when I learned I would be going to Hawaii in the fall for the Ironman Triathlon World Championship.

I always look to see what I can find to do in a new city and Jackson was pretty small so there wasn't a lot to do, especially in January.   I learned there was an agriculture museum 4 miles outside of town so ended up heading there by myself.  It was a little farm village which reminded me of a little village in my original hometown of Archbold, Ohio.   They had some history of the cotton industry and as my mom had asked me to pick her up a package of cotton still in it's shell it was the perfect place to pick up a souvenir.    https://www.msagmuseum.org/ 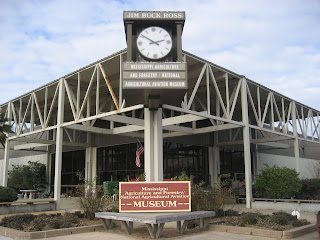 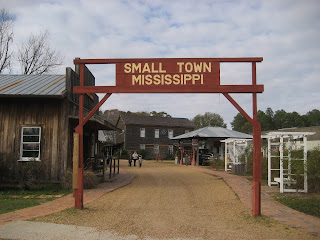 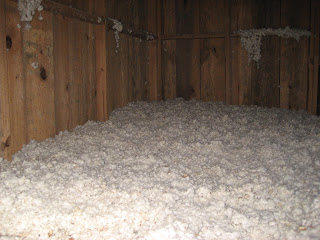 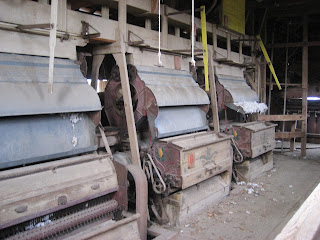 Being a small town, race logistics was simple.  Race morning was really perfect running temperature of 48 degrees with maybe a high of 60 by end of the day, but a pretty breezy day with 10-15 mph winds made it feel colder.    The town welcomed the runners and had very friendly volunteers...very good Southern Hospitality if you will.  The course was lined with fabulous Blue's Bands every 5 miles.  I remember the Country Music Marathon the music was inspirational as there was music about at every corner of that race and one of the reasons we picked the Mississippi Blue's race.  Although the south, it was still winter season and the course was mostly in and around Jackson which in the middle of winter wasn't especially scenic. 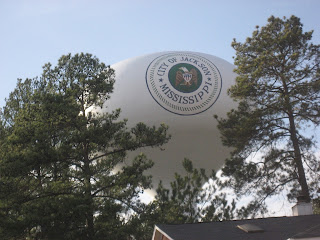 I think had worn myself out from the week of cycling and my body needed a break but with the marathon weekend upon me I never got a chance.   There were plenty of rolling hills along the entire race course and even a few doozies at mile 23, 24, and 25.    I didn't have the fastest race, partly because of all the time off since my last marathon, adjusting to the time zone difference and a 3 hour difference in time zone, the red-eye flight in on Thursday, a hilly course, and yes even run down from that week of that hard week of cycling.  Pizza and beer were available at the finish line but I think they ran out of pizza before all the runners were finished.   Because of the breeze and just that usual after marathon chill that your body gets, so I was still a little cool after the race so welcomed the silver blankets they were handing out.  Also at the finish line finishers received a super cool looking medal shaped like a guitar!   I stuck around the finish line with John's wife and awaited him so we could cheer him on for his marathon finish. 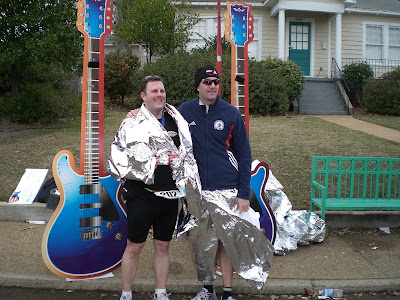 One of my best friends live in New Orleans and has praised a good ole' fashion soul food restaurant called Mama Hamil's which is only 12 miles away in a nearby town called Madison, Mississippi.  Well worth the drive!   Nothing better after a long day of running then a buffet of greasy fried chicken!    https://www.hamils.com/

Saturday races are always the best because you get Saturday night out on the town after the race and usually don't have to worry about getting up early the next morning.   There was one place in Jackson that promised live music Saturday night called the Blues Cafe.   I had a designated driver so I think I was able to let a little loose after the race which I think I regretted the next morning.  The famous Bobby "Blue" Bland was performing at the cafe and did not disappoint! 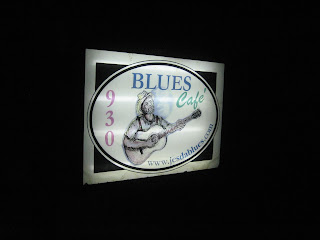 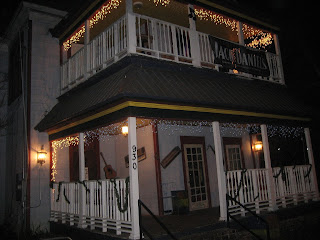 Because of exhaustion I think, I ended up getting really run down after the race which brought on a full blown flu the next day which continued for the following week.  Urg.   A long layover on the way back to California, so I didn't reach the comfort of my own bed until nearly 2 a.m Monday morning.

Also learned of a Mississippi Blues trail markers that tell the stories of the Blues.   http://msbluestrail.org/blues_marker_list 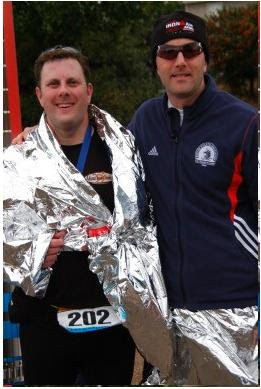 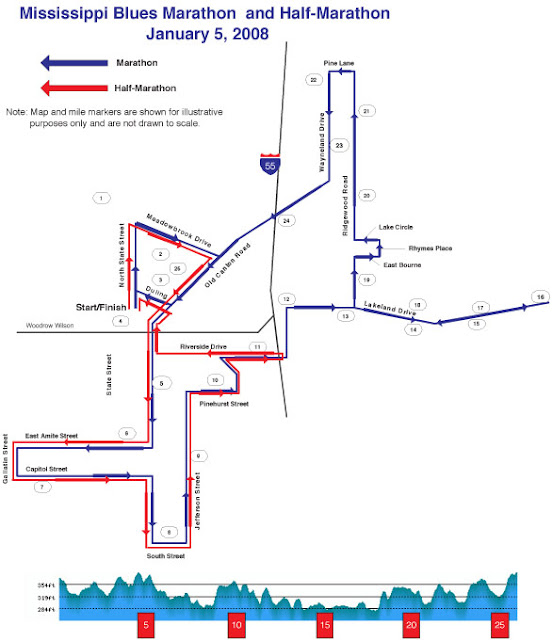 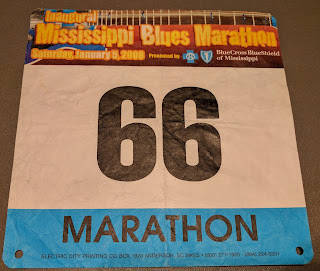 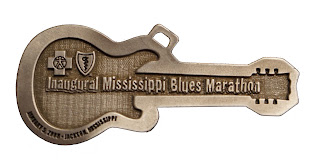