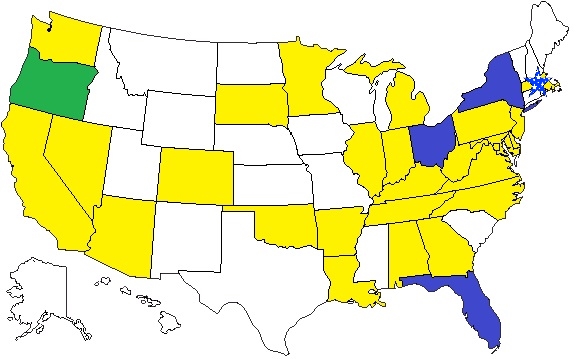 Wow, finally a chance to write my experience for The Boston Marathon.  This race has a cult status, every time you share with anyone you're a marathon runner, they always ask, "Have you run Boston?"  Now I can answer, "Yes I did!"

This my first marathon of 2006, and next marathon since Seattle Marathon November 2005.   It comes right in the middle of my preparation for Ironman CDA only a few short months away.  My training was cross training between swimming and trying to add weekly mileage to my bike.
Taking one step back is how I had the opportunity to even enter this marathon.  Seeing that my marathon times have climbed over the years, it seems like my chances of every actually qualifying for Boston were only a dream and would never be reality.  As luck would have it, while running in Huntsville, Alabama in 2004, I had the opportunity to meet a runner from the Boston area that had the "connections" to get me and a few friends an application to the race.  I stayed in touch and was able to get my friends John and Todd as well as myself official entries.  When are applications finally showed up in the mail the first of 2006 all three of us were ecstatic!

The time went so fast and race day was soon here.  We stayed at the Marriott in Newton, close to the last stop on the Green Line of the subway, with shuttle service to and from the Riverside T stop.  Homeyra, Parisa, and I flew all the way x-country from Seattle on a red eye flight leaving Friday night.  We finally arrived in Boston and made it to the hotel about noon on Saturday.  We napped a bit and then met friends John & Teresa downtown in the Italian Village area.  We took the T downtown and walked the Freedom trail to the restaurant.  Everything was great, and was ready to retire early Saturday.

Sunday we woke up with a bit of excitement to visit the large marathon expo.  Again to the T downtown, transferred trains, and were dropped off at the World Trade Center where the expo was located.  We took our time walking around the crowded expo.  One of the coolest booths was Adidas which had a giant wall with everyone's race number and a blank to write your reason for running.  Also a production booth you could record a video of your reason to run which was published on the web the following week.  The official marathon merchandise was all very nice, but some of the popular items were sold out, so didn't buy anything.

After the expo we watch street performers, had lunch, shopped, and went on to follow the freedom trail.  We visited sights such as Bunker Hill, Paul Revere's House, City Hall, Old Ironside, a couple historic grave yards including that of Samuel Adams and much more.  We finally connected with Todd and his new bride and the six (plus Parisa) took a taxi from the hotel for dinner.

Race day was a new experience since it was both on Monday and didn't start till noon. We arranged for a taxi/shuttle from our hotel to the marathon start.  This was better than the alternative of getting up early, taking a train all the way downtown at 7 am and then taking a bus all the way back up to the start.  The whole town of Hopkinton is closed down to traffic, so our shuttle actually took us to the State Park for where a marathon shuttle took us to our final destination, Athletes Village.

The walk from the shuttle drop off .7 miles to the Village was when I started to feel the excitement that The Boston Marathon is all about.  There were two villages set up for the first time.  We had to walk past the first village to get to our village.  First village would start with the gun and our village would start 30 minutes later.  We had a couple hours to relax and breathe in the moment.  We were surrounded by some of the best athletes in the world.

A live band played at the village, but was at village A, so us in village B could only hear the good vibrations.  Between songs the announcer was very good at letting everyone know exactly when to expect to do what.  First village A emptied and 30 minutes later we were to empty and make our way to the start.  It was exciting to move in the masses from our village pass village A then pass the buses where we could toss our pre-race bags and clothing.  Next we headed up the same path we walked down only a couple hours earlier to the start.  There were corrals based on your bib number, I was 20,123 so I was in one of the last groups to be released some 39 minutes after the first gun went off!..

Numbers were checked by volunteers as they tried to weed out any bandits that tried to start with the pack.  It was interesting to see all the different fake bib numbers!  By the time I finally passed the start line I was so excited I forgot to start my watch until my friend Todd reminded me we are rolling!  We each three wished one another good luck and began our first Boston Marathon.  The first two miles were just wall to wall people and it was no use try to pass anyone.  After two miles the crowds slightly thinned, enough to begin a weave to any openings.

We enjoyed the endless crowd participation, especially loud past Wellesely girl's college at mile 12 and again at mile 21 past Boston College.  Todd & I stuck together through mile 14.  Todd pushed me every mile until finally I couldn't stay with him any longer.  I started walking 30 seconds every water stop and he gained about 5 minutes on me.  It wasn't until about mile 20 I caught a glimpse of his orange shirt which gave me a burst of energy to catch up.  I finally made it up to him and said hi.  He was starting to feel a cramp coming on and had to slow down.  I think the constant downhill since the start was not only getting the best of him, but also me and everyone on the course.  I was able to maintain my current pace and pressed on.

Finally near the finish line the crowds the last couple miles were 6 people deep.  It was so loud you had no idea if someone was cheering for you where they were in the crowd.  The last turn you can finally see the finish line.  It still seemed like forever.  I did my patented summersault across the finish line.  I nearly cramped up after trying to get back up, but walked it off feeling the accomplishment of completing my first Boston Marathon.

After getting my metal and heading for my meeting area, I found Homeyra & Parisa waiting proudly.  I know it was a long day for her taking care of the baby through all the people.  We found a pizza shop near the finish line and waited there for Todd and his wife to join us.  From the Pizza place we made our way back to the hotel and called it a night. 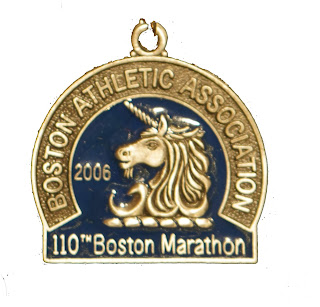 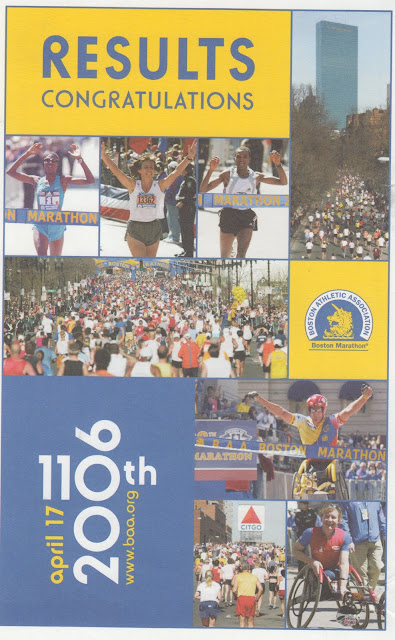 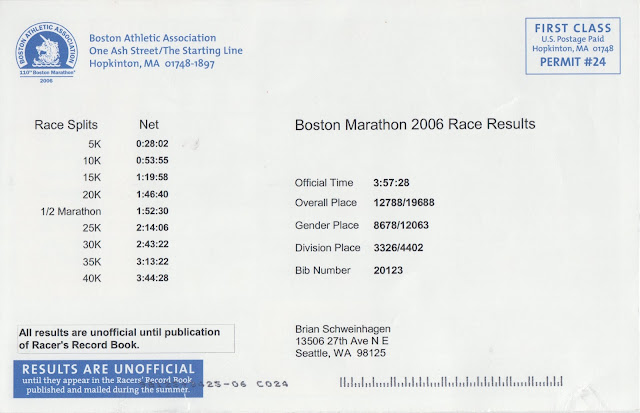 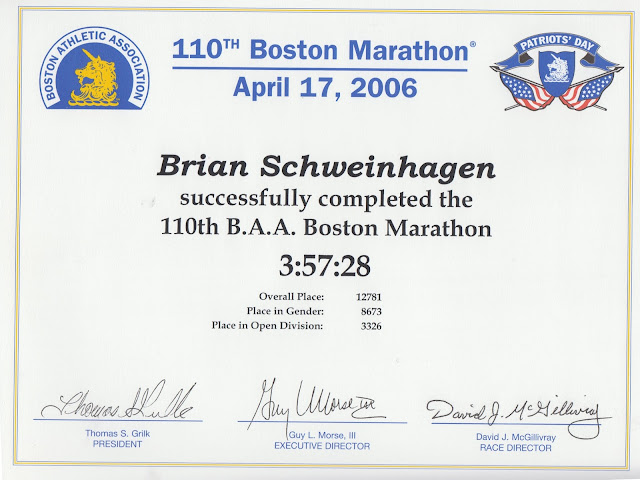 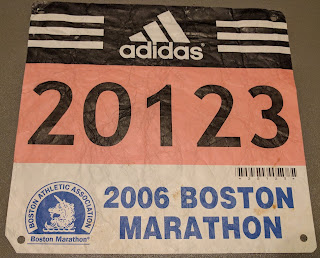